I've been busy lately, not much updating here. I'll tell you something, though. If the choice comes between updating my LJ and living real life, I'll choose real life.

Anyway, I'm home for lunch with a few minutes, so I'll give a bit of a wrap-up of what I've been up to lately.

In the past couple of weeks, we've been to a bunch of concerts: Bruce Hornsby in Charlotte one weekend, then back-to-back shows the next weekend -- Marc Broussard, Umphrey's McGee, and Bela Fleck in Cary and Oteil and the Peacemakers, The Derek Trucks Band, and The Allman Brothers Band in Raleigh. Good shows all around, especially the Hornsby show. We've got Eric Clapton on the schedule for October.

I've been doing a lot of geocaching. A few weeks ago, I hit up a few caches around one of the local lakes. I ended up hiking about six miles that day, I think. This past Friday, I was working on a complex cache and ended up hiking about three miles and spending about four hours in the woods looking for that one. Still didn't find it -- I'll be back to look for it some more soon enough. Yesterday, I found a handful of caches in the Kernersville area and picked up all of the clues for one of the Kernersville multi-caches.

A little bit of waymarking has been on my plate, too. While caching yesterday, I stopped at the Kernersville Town Clock. Town clocks are pretty cool.

Work's been busy, but not overly so. I'm not having to work a bunch of overtime like I was on the last project I worked. It's great when it balances out like this.

I'm taking a vacation in a few days, and really looking forward to it.

Over the past few weeks, I've been busy on the movie front, too. Both watching and creating. 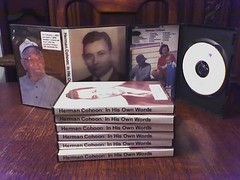 The most exciting thing that's happened is that I finished the documentary I've been working on for about three years. It's a collection of a couple of interviews with my grandfather. I interviewed my grandfather in 2003 and again in 2004, videotaping the interviews. Since then, I've edited it down to a nice narrative, including incorporating some photographs into the narrative. I had to take a break between shooting the video and editing the movie together because my old iBook just couldn't handle the video editing. We got a new computer in December that could, and I picked the project back up a few months ago. The completed project was about 45 minutes long and I burned it onto a DVD, complete with nice menus, chapter markers, and all that cools stuff. I also included a couple of slide shows that my father made on the DVD. All in all, it came out great. I'll probably write some more about the whole process sometime later. Next up, I'm going to do the same thing for my mother's parents.

I watched Memento again last week. It's been several years since I've seen it, and it held up to another viewing just fine. I've always wondered how that movie would look if it were edited to not use the trick that is key to the way the movie plays. Well, now that I've got the hardware and software to dit a movie like that, I did. It was pretty easy to do a very rough re-edit because the scene transitions necessary for the edit were obvious because the movie switched between color shots and black and white shots. There's a little overlap that I think I need to cut out to make it more seamless, but it's probably good enough as it is. Maybe in the next few days I'll get some time to watch my edited version and see what I think. Anyway, it was lots of fun doing the editing.

While I was on such a roll editing movies, I decided to edit the commercials out of The Exodus Decoded, a documentary that was on the History Channel last week. I didn't get to see it when it was on, but I set the DVR to record it. Transferring it to the computer to edit the commercials out was easy enough, and the end result is a DVD with the documentary, without the commercials. I may show parts of it to my Sunday School class some time, or let them use it for weeks when I'm not in town to teach. Again, it was pretty fun working with my movie editing tools in order to make it happen.

The most obvious thing I learned with all this movie stuff is that I need to put a big new hard drive on my wishlist. Digital video is extremely space consuming.

I'm having a productive day today, and it feels good.

My recent duties at work have had me starting my work day earlier than I usually do. I like it. For the past week or so, I've been in the office, working, by 0815, usually by 0800. In addition to that, I've been getting up early enough to have a little breakfast, too, which has really helped me start the day off well. I'm going to try to keep up this work schedule -- coming in a bit earlier lets me leave a bit earlier. I can use that extra time in the evening to get some caching in, or to come home and get some stuff done around the house, or just relax. Anyway, I had a good day at work today.

I came home from work -- a little earlier than usual, since I went in a little earlier -- and mowed the lawn and did some string trimming. It looks good and I got all hot and sweaty doing it, so I came in for a nice cold shower.

I put a load of laundry in the washer and I've gathered all of my clean, but unfolded, clothes to fold. A nice cold Sprite and some Law And Order and Without A Trace on the TV, and I'm feeling pretty relaxed this evening.

I think I'm going to heat me up a chicken breast for supper and then hit the clothes sorting/folding task pretty hard. I should be able to get all my laundry taken care of before going to bed tonight. That's my plan, anyway.

ETA: Oh, yeah -- I changed a couple of light bulbs in the basement stairwell, too.
Collapse