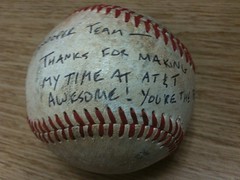 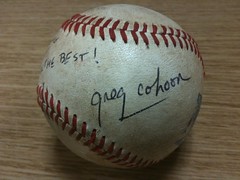 Today was my last day at work. I start a new job Monday.

I've worked at the job I'm leaving for about twelve and a half years. It was my first job out of college. I worked there from 1996-1999, then took a break to work for a startup for three years. In 2002, I was thrilled to be able to return to the job I left, and I've been working there ever since.

Changing jobs was a very difficult decision, primarily due to the fantastic team of people I am leaving behind now. Several of the people still working there were working there when I first started in 1996. Such longevity is extremely unusual in the software development industry. These people are more than my coworkers, they are like family. My time at the job has been highly rewarding, and I hope to be able to work with each of the people on the team again at some point.

It was difficult to make the decision to leave, but it was time to go. Over the past several years, the company has been shifting strategies with how they produce the software that I wrote for them. The more things shifted, the more obvious it became that there was not going to be a good long-term fit for me going forward. I started looking for another job, and things actually fell into place pretty quickly.

Over the past couple of weeks, I've had some great conversations with people at the old job, including several levels up the management chain. Everyone seemed interested in hearing what I had to say about how I'm seeing things change on our team, and what can be done to help ensure the future success of the team. I hope that the team continues to thrive. Who knows -- if things at the company shift back to create an environment similar to the environment there was two years ago, I'd welcome the opportunity to work with my team again.

The new job is not going to be without its drawbacks, to be sure. Notably, my commute is going to change from about seven minutes to an hour fifteen or more. I'm not going to be able to meet

yarbiedoll for lunch anymore. I already told my ticket rep with the Grasshoppers that I won't be renewing my season ticket for baseball next year. I've dropped off the committee I was on at church. I'm sticking with the praise band, but pretty much everything else I was committed to that takes time, I've cut back. I'll be listening to a lot of podcasts on my commute. It's definitely going to be a different mindset, with the new commute.

As I finished out my final days at the old job, many of my coworkers came by to wish me well. I'm definitely going to miss that team. On the flip side, I'm looking forward to getting to know my new team.
Collapse